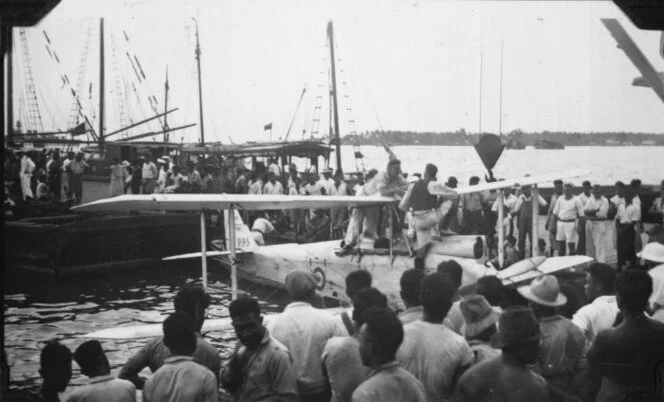 Sidney Wallingford was born in 1898 in Kent, England, but moved with his family to NZ when he was 13. However, no sooner had he’d finished school at Auckland Grammar at 18 than he joined the Mercantile Marines so he could pay his own way back to England.

On his arrival, he was placed with the ‘Artists Rifles’ regiment, then joined the 4th Battalion Rifle Brigade, where he saw some early action in the Salonika campaign in the Balkans. He transferred to the Royal Flying Corp in March 1918, completing his flying training in Egypt; he flew there and in Palestine before the war ended. The young Wallingford retained his rank as a Lieutenant on the reserve and returned to New Zealand in 1921.

He farmed for a while near Hamilton then landed a job in the Fijian police for a couple of years. Back in NZ, he met his wife-to-be, Kathleen Jamieson, at a dance in the Paerata Hall, but was soon back in the UK with the RAF. Wallingford’s father, who had won a Military Cross with the NZ Army at Gallipoli, was an Olympic shooter and during these years his son became the two-time RAF rifle champion at Bisley, winning the coveted Queen Mary prize.

In 1929 Wallingford came back to NZ to join Squadron Leader Len Isitt at Hobsonville as the first adjutant of the NZ Permanent Air Force – and only the fifth member of staff. Kathleen had been nursing while Wallingford had been in the UK, but they’d kept in touch and got married soon after his return.

As Adjutant, Wallingford’s role was to assist the commanding officer, but within a few months he was on his way to Samoa on board the HMS Dunedin to assist in quelling unrest among the Mau, a political group who were agitating for Samoan independence from NZ (this was achieved, but not until 1962).

Throughout February and March 1930, Wallingford flew reconnaissance missions in Samoa in a de Havilland Moth fitted with floats; it constituted the first active service for the NZPAF. At one point he dropped a makeshift bomb, improvised by the navy’s gunner from a treacle tin, in front of a boat suspected to be running guns for the Mau; luckily it didn’t blow up as it turned out to be an Australian missionary on his way back to his post.

More action was soon to be found flying supplies and medical equipment into earthquake-devastated Napier in 1931 – and ferrying out casualties from the ruins. His daughter Margaret was born in the same month as the earthquake, and his son Geoffrey in 1933 at Hobsonville. Geoff would himself go on to have a distinguished RNZAF career.

A few years later, in 1935, Wallingford became a very public hero when he landed a Fairey IIIF seaplane on the water outside the surf line at Karekare beach on the West Coast, saving the life of a young woman who’d been swept out to sea; a thrilling story which can be read here.
It was a brave and dangerous mission which inspired the founding of the Karekare Surf Life Saving Club.

In 1936 Wallingford sailed with his young family back to the UK to attend the RAF Staff College and was later appointed NZ Liaison Officer with the Air Ministry, based in London. He was meant to be involved in ferrying 30 Wellington bombers back to NZ in 1939, but the war broke out, so instead NZ loaned the planes and their Kiwi pilots to the RAF for the duration; they went on to become the famed No.75 (NZ) Squadron.

The citation for Wallingford’s CBE, awarded much later in 1944, said of this period that he had ‘held the appointment of NZ Liaison Officer at the Air Ministry with conspicuous success and efficiency… the reorganisation and expansion of the RNZAF made great demands upon Air Commodore Wallingford’s capacity and he showed himself to be an officer of ability, resource and initiative.’

Son Geoff says these were tough years for his mother. “Kath showed her resilience during those first two years of the war. We were living on the south east coast at Hythe, right through Dunkirk and the air battle above, then moved to London at the height of the Blitz; all the while she kept the family together.”

Wallingford was appointed Air Member for Personnel early in 1941, after Japan officially entered the war, but of course everything ramped up after December 7, 1941, when Japan bombed Pearl Harbour. In October 1942 he became Senior RNZAF Officer co-operating with the American Forces in the Pacific, then Commander of the Number One Island Group, in charge of all RNZAF personnel fighting the Japanese in the Pacific.

In 1943 Wallingford was awarded the US Legion of Honour for his work commanding the No. 1 Island Group, for his ‘ready cooperation, unflagging efforts and inspiring leadership’. His last appointment, as Air Officer Commanding Task Force Headquarters at Clark House saw him back at Hobsonville in 1945, the base where his RNZAF career had begun.

He and Kath retired in 1954 to Rotorua, developing a home and garden on an acre of gorse and scrub; twenty years later, they did the same at Opito Bay in the Coromandel.