Home is Where the Art is 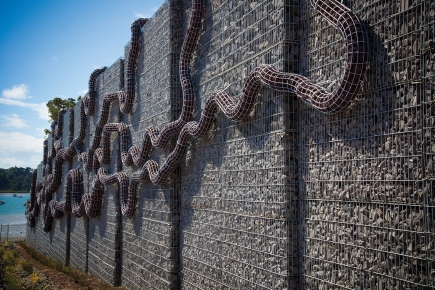 People love to visit or live in places that have public art. In the case of the visitor, public art is a source of surprise and wonder. It stops you in your tracks, or at least slows your passage through an environment while you look, think, smile, feel in response. It creates 'a rupture in pedestrian life'. In the case of the resident, public art makes you feel more connected to the place you have chosen to live. Art engenders feeling of pride and loyalty in a community. A recent American study of 43,000 people in 43 cities found that "social offerings, openness and welcome-ness," and, importantly, the "aesthetics of a place – its art, parks, and green spaces," ranked higher than education, safety, and the local economy as a "driver of attachment."

The other great thing about public art is that it's free. You don't need to buy a ticket, dress up, drive to the gallery and find a car park. It's open to everyone, all the time. Hobsonville Point's public art is all outdoors. The pieces become part of the landscape in which they are installed, so as a resident you have the privilege of seeing the works' interplay with their surroundings; in different light, through changing seasons, and as they acquire the patina of age.

Five new pieces of public art have been installed at Hobsonville Point in the last 12 months, bringing our total to 10. Two of these pieces are temporary and the other eight, permanent. All of Hobsonville Point's public art will be on or visible from the Coastal Walkway. This 4km circuit hugs the coast around the peninsula and then cuts across the site through Hobsonville Point Park. It is underway now and should be complete by the end of 2016. Several of the pieces are by very highly regarded New Zealand artists, such as Virginia King, Louise Purvis and John Reynolds. They are all a 'team effort', utilising the expertise of landscape architects to help site them in a way that will best frame the work. Some of the works have been created with community involvement, such as From the Ground Up, which all 97 students of Hobsonville Point Primary had a hand in, and Tree Cosy which was created by a team of around 20 guerilla knitters.

Do the benefits of public art go beyond making a place nicer to live in and pleasant to visit? There is an ongoing debate internationally over whether art has intrinsic and instrumental value. (And if it has instrumental value, to what degree). Intrinsic value relates to the aesthetic value of any work of art, its own value as a piece of individual expression. Instrumental value relates to the ability of art to educate, create jobs, increase real estate value, build citizens, increase tourism, and provide other benefits. Artists tend to believe that art can do both; that it provides pleasure through aesthetic value, but also has the power to make the world a better place. We agree.