Hundreds On-Board To Have A Go 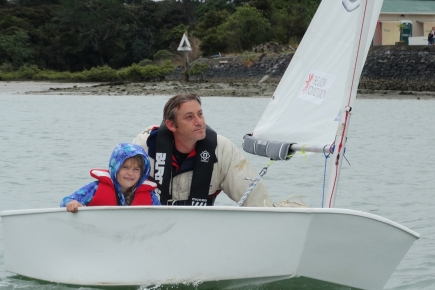 Once was not enough for many of the first time sailors who attended Hobsonville Yacht Club’s Have a Go Day at the beginning of February.

Almost 200 people participated in the event, which was organised by the yacht club in association with Yachting New Zealand to encourage anyone who had not sailed before to get out on the water in a fun and safe environment. There was something for everyone on the day, with Optimist and Topper dinghies, a Weta Trimaran and even a waka taking would-be sailors to sea in the calm waters of the Upper Harbour.

“The weather started off wet but got better as the day went on. No matter what, the smiles were the same all day. We had 192 people go for a sail and about 100 of them then went for another one.”

Buoyed by the success of the day, the club hopes to build its own sailing fleet in time to repeat the event next year and is also starting a junior sailing programme. It has already received 20 membership applications from people who enjoyed the day and want to stay involved.

More information about the club and membership is available at www.hycnz.org.nz or simply visit the club at the far end of The Landing on Wednesdays or Fridays between 5pm and 7pm.