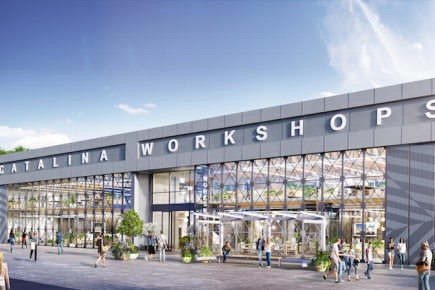 Willis Bond & Co has released its plans for Catalina Bay, an exciting new waterfront development at Hobsonville Point. The area will include a mix of retail, hospitality and apartment buildings, housed in the existing historic RNZAF hangars and workshops, as well as new modern additions sympathetic to the area’s rich history.

Many will know this area as The Landing, but the headland is more accurately named Catalina Bay, referencing the Catalina seaplanes that were once based in the area. It’s now home to a vibrant twice-weekly Farmers Market and a ferry terminal to the CBD, and forms part of the 4km coastal walkway around Hobsonville Point.

Catalina Bay is masterplanned by Cheshire Architects, the firm behind innovative developments such as Britomart and City Works Depot. Stage One of the development plan consists of commercial, hospitality and retail opportunities within the character-filled RNZAF buildings. Construction for Stage One has begun, and tenancies will be completed progressively from late-2017 through to late-2018. Stage Two will deliver 60-80 high-quality seaside apartments, and Stages Three and Four will deliver new-build commercial, hospitality and retail tenancies.

For more information and to register your interest in Stage One tenancies, visit www.catalinabay.co.nz.