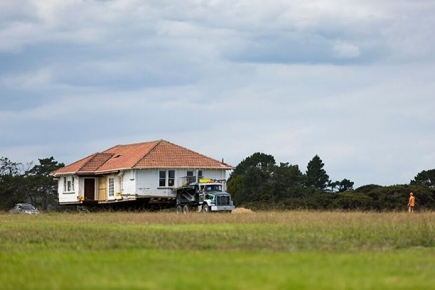 Insomniacs and early risers would have been in for a strange sight recently at Hobsonville Point – the rather imposing Base Commander's house rumbling down Sunderland Ave in the dark, small hours of the morning, on the back of a truck. At 260m2, it's a large house to be moved in a single piece. Building removal specialist, Craig Walker says it tested the limits of their equipment and provided the kind of challenge he and his team relish.

The house was moved to a new site on the corner of Sunderland Avenue, where ten other heritage homes have been expertly refurbished by developer Willis Bond & Co. In one of life's happy coincidences, Craig lived in the house as a small boy, so he was delighted when his firm won the contract to move the house.

Craig's father was the Base Commander at Hobsonville Air Base when the family lived in the house between 1961 and 1964. In those days the second world war was still fresh in people's minds and the Base Commander had a position of status. "Dad even had his own batman [the military version of a valet] to help with domestic duties."

The house was far larger than any of the other homes on the base. Through the eyes of a six year old boy it was "absolutely massive". Craig recalls grand Christmas parties for Auckland's leading military and public figures in a big top-sized marquee on the front lawn.

Military training was compulsory in New Zealand until 1972 and Craig says the base was busy with soldiers marching and performing drills. "They overflowed the barracks so they were housed in long rows of tents."

For the children of the officers that lived on the base there were some perks. "We were allowed to use the swimming pool. We had a swimming vest and once you'd passed your swimming test your badge was sewn onto your vest and you could swim." They could also use the tennis courts and gymnasium. On the other hand, there were also some 'no-go' zones and if they strayed into forbidden areas the marshal charged with maintaining law and order on the base would be after them. "If you got caught by the marshal you were in heaps of trouble. We were pretty scared of him".

The Base Commander's house was moved in one piece to preserve as much of the original timber as possible. Cutting the house would have required it to be respliced with modern materials. Once renovated it will complete Sunderland Avenue, a street of 1930s officers houses which have been painstakingly restored by Willis Bond. The Base Commander's House will be brought to market when its restoration is complete.

Craig says he feels "honoured" to be part of shifting his one-time family home. "Auckland is a wooden town – or it least it was until the seventies. We're lucky that we can move these buildings to preserve them. I think Hobsonville Point is an amazing template for residential development in New Zealand. Keeping the old houses and buildings adds dignity to the whole development. When you drive around the corner and see all of the Sunderland houses lined up and given a new lease on life, it's brilliant. I have nothing but praise for their [Hobsonville Land Company's] approach."

Willis Bond are opening Sunderland Ave to the public on Saturday 9 April, 11am – 2pm for an opportunity to walk through six of the ten completed heritage homes. You can also view the recently relocated Base Commander’s House on its new site. Visit www.sunderlandlife.co.nz for more details.