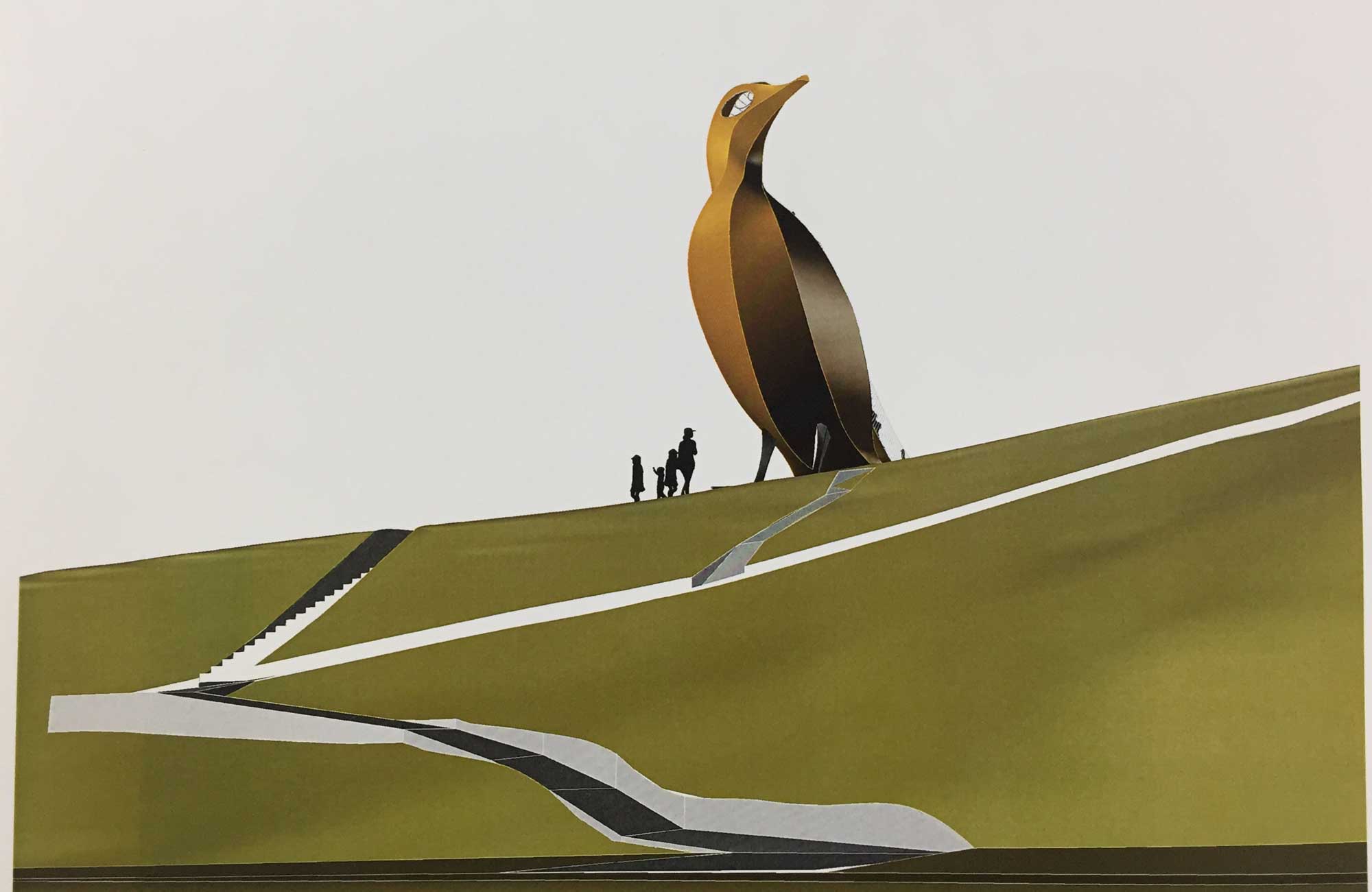 “I hit the wall many times with this project. I’d go to bed with a problem I couldn’t figure out, hoping I’d get the 3am ‘night shift’ – a spontaneous kind of brain shift around the issue... If I was lucky I’d wake up seeing a way forward.”

So says sculptor Philipp Meier, creator of Te Kanohi o Te Manu (The Eye of the Bird): a massive, 10m high corten steel sculpture of a pied shag commissioned for Harrier Point Park. The big bird is being fashioned with steps inside it. At around three storeys high, children will be able to climb up to the shag’s head for a stunning view of the harbour through its eyes – then slide down the bird’s back and tail to the ground.

Although Philipp lives in Te Awanga, Hawke’s Bay with his young family and his studio is in Napier, he has helped design many of Auckland’s most extraordinary and sculptural playgrounds in conjunction with Isthmus Group, including the Myer’s Park and Silo Park playgrounds. In 2010, Philipp brought to life the ‘forest floor’ playground at Hobsonville Point Park. There are giant corten berries and seedpods of puriri, manuka and nikau, and huge nests strung between tall posts which can be climbed into, making cosy playhouses. The sculptural playgrounds have two things in common – New Zealand native flora and fauna, and a distinctive playfulness around scale.

“Many of us have had that experience of going back to where we grew up but finding that everything is much smaller than we remember,” Philipp says. “Hopefully that won’t happen here!” The upscaled objects are fascinating for adults too – there’s a magical, almost primal shift in perception around things which are bigger than they ought to be. Philipp was born in Germany and came to New Zealand with his family aged 10, but returned in his late teens. He spent his time on building sites and had a number of unsettled years shuttling across the world, not really knowing where his home was.

“But then something shifted,” he says. “I realised I was coming back to NZ for good.” Philipp began training here as an architect but realised he needed to create things in a more hands-on way. He undertook a degree in Visual Arts and Design at the Eastern Institute of Technology in Napier, training in 3D design and eventually working at Cicada Studios with the late William Jamieson who became his friend, mentor and colleague.

The huge pied shag sculpture was officially commissioned in July 2016 but has been beset with delays, including complicated building consents and engineering challenges with subsequent design reviews. Then Philipp had a mountain biking accident that saw him unable to work for months. Nick Pearson of Isthmus worked with Philipp on the award-winning ‘Habitat Markers’ at Hobsonville Point as well as this project.

“Philipp is a brilliant designer who’s very technically proficient. But the scale of this sculpture is pushing the boundaries beyond anything he’s done before.” Challenges continue around the build itself. The bird needs to be created in two pieces to be assembled on site, but even at half of its finished height, the sculpture is hard up against the ceiling of his studio.

The corten steel plate comes in standard thicknesses, but due to size complications, more steel has had to be added for strength. Philipp jokes, “You could say I’m a steel tailor; patterns are made and cut just like dressmaking, but my sewing machine is a welder – and it’s maybe a little bit more dangerous.”