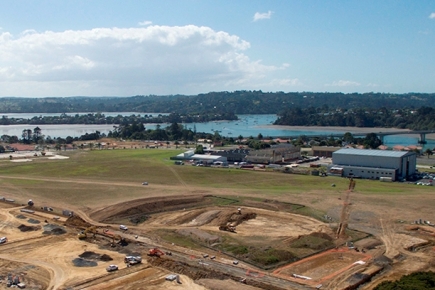 The first stage of housing is about to get underway on the Airfields site with overall resource consent now approved.

The Airfields 14/6 masterplan for the Auckland Council-owned site was adopted by Council late last year having been earlier developed in conjunction with the Hobsonville Land Company. It consists of a minimum of 14 hectares residential and up to six hectares for mixed use development. In total a minimum of 890 houses will be built and Council organisation Panuku Development Auckland has signed AVJennings to deliver the first stage.

One hundred and two homes with a mix of standalone and terrace houses will be built across 1.95ha along the site’s southern edge as part of this first stage. A minimum of 10% will be affordable Axis Series housing and construction is expected to start later this year.

In the meantime, key infrastructure works are well underway including landscaped stormwater ponds and roading networks to create future housing. Towards the north of the site, Panuku has also recently demolished three buildings and retained the former WASP Hangar which borders with Launch Road. With initial refurbishment works now complete, the WASP Hangar is destined as a focal point for the mixed use zone in the future.

Panuku Development Manager, Don Greenaway, says he’s proud to be leading the delivery of this new precinct at Hobsonville Point and the Airfields site’s location in close proximity to The Landing, combined with its stunning sea views, will make it a worthy addition to the wider point community.