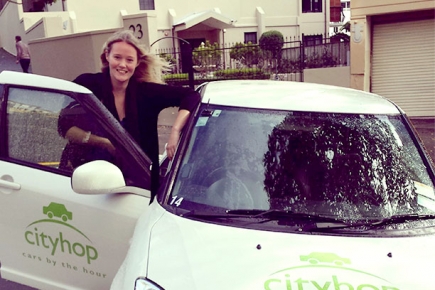 The initiative is designed to encourage residents to consider alternative transport options to private car ownership. It offers a convenient, affordable and reliable way to use a car when required without the need to house, or pay for, your own vehicle.

Victoria Carter, Cityhop Founder, says most people don’t realise that, according to the AA, their car costs them $800 plus each month when all the costs of ownership are taken into account. Many people do not need two cars and like car sharing for the convenience of a car for occasional trips.

Car share schemes have proven popular internationally and are operational in over 600 cities. In America, over half a million people share cars while residents in Sydney, Melbourne, Brisbane, major British cities and many European cities are also increasingly sharing vehicles.

Closer to home, there are currently 23 Cityhop cars in Auckland, including eight in the CBD, Britomart, Sale St, Parnell, Ponsonby and K’ Road. Two cars will be introduced at Hobsonville Point later this month, adding to the city’s fleet.

Cityhop cars are also available in Wellington and Christchurch.

Research supports car sharing, showing that people utilize more public transport and drive less when they join such a scheme. One shared car takes an estimated 15 private vehicles off the road.

“Car sharing should be an important option in every major urban centre,” says Victoria. “While not a magic bullet to solve all traffic and air quality problems, especially commuter-related issues, it is an important new tool that can deliver real benefits quickly from primarily market-based capital.”

Hobsonville Point will have two Cityhop cars from the end of the month. To celebrate the introduction of the scheme at Hobsonville Point, residents can sign up for a yearly membership for only $60 (compared to the usual price of $120). Membership is then free for the resident’s family and the cost to hire a car, including fuel, is $15 an hour or $75 for more than five hours. The overnight rate, for hire from 6pm to 8am, is $30.