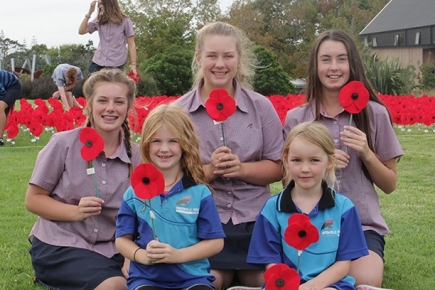 The green grounds of Hobsonville Point Park were awash with red last month when 2000 poppies were installed on the grass as part of the Peace Poppy Project.

The project is the brainchild of West Auckland artist Cristina Beth and this was the second year Hobsonville Point has been involved. About 1300 poppies made in 2015 were reused alongside 700 new poppies handmade by residents of the Waterford Retirement Village, Hobsonville Point’s two schools and the wider community. School students (pictured here in a photo taken by the North Harbour News) helped install them in neat rows, bringing a vivid and vibrant splash of colour to one of the most popular communal spaces at the Point.

The Peace Poppy Project began in 2013. It seeks to remember and honour those who have served while also encouraging participants to hand make symbols of peace and promote peaceful living.