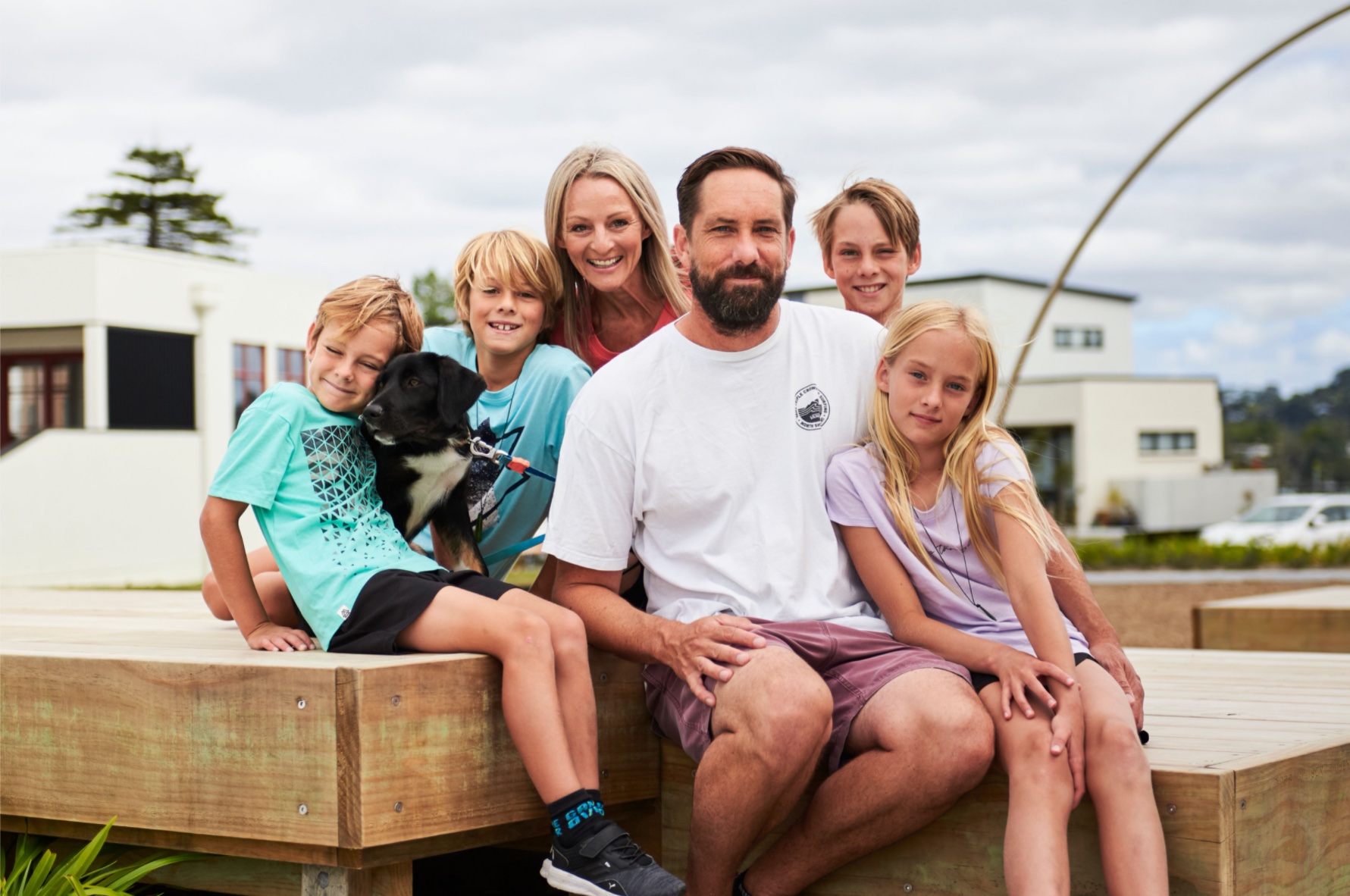 The Breckell family, plus puppy Kona, hanging out at the new half-basketball court and playground near the Headquarters Building.

The Breckells – Michael, Janelle and their children, Justin, 12, Isabel, 10, Seth, 9, and 7-year-old Jesse, are part of the story of Hobsonville Point.

Janelle Breckell has a strong connection to the Point – she spent some of her youth in West Harbour and thanks to her good friend’s dad being in the air force, she had a joint 21st party in the Sunderland Lounge back when the area was still an active base.

Years later, Janelle and Michael were renting in Birkenhead. Michael had heard Hobsonville Point was going to be developed and scoped it out as a place to buy a home and put down roots as a family. “I liked the land, with the water here,” Michael says. “And we love planes and the history of the air force,” adds Janelle.

Janelle called the air force to ask about renting one of the staff homes still on the decommissioned site. In 2011 they lived in a little state house-style home for nine months when Justin and Isabel were toddlers.

“We lived next door to the original Catalina Café owners,” says Michael. “It was us and them and paddocks.” The family felt a bit like pioneers, but they knew Hobsonville Point was masterplanned and that made a difference. “What we liked about Hobsonville Point outweighed the risks.”

In 2012 they bought their first home off the plan in the affordable housing scheme, a two-bedroom standalone house in Lester Street. “It was beautiful and brand-new. We loved it from the beginning,” recalls Janelle. They lived in it for four years and as the family grew, they made alterations to the master bedroom and split it down the middle.

When Justin started at Hobsonville Point Primary, he was one of only 17 students.

Their next home had three bedrooms and a second living room, located on the main road across the road from the primary school. It was a three-storey home on a smaller section than Lester Street, and the neighbours were closer, but it was the right move. “It was another calculated risk,” says Michael. “We were looking for an opportunity to stay within our means.”

Recently, with four growing children, the Breckells decided to move to a home with a pool in Herald Island. It’s a 10-minute drive away and Hobsonville Point is still very much part of the family’s lives. The children are all still at school here and most of their friends live at Hobsonville Point. “Our foot is still in the door here,” Janelle says.