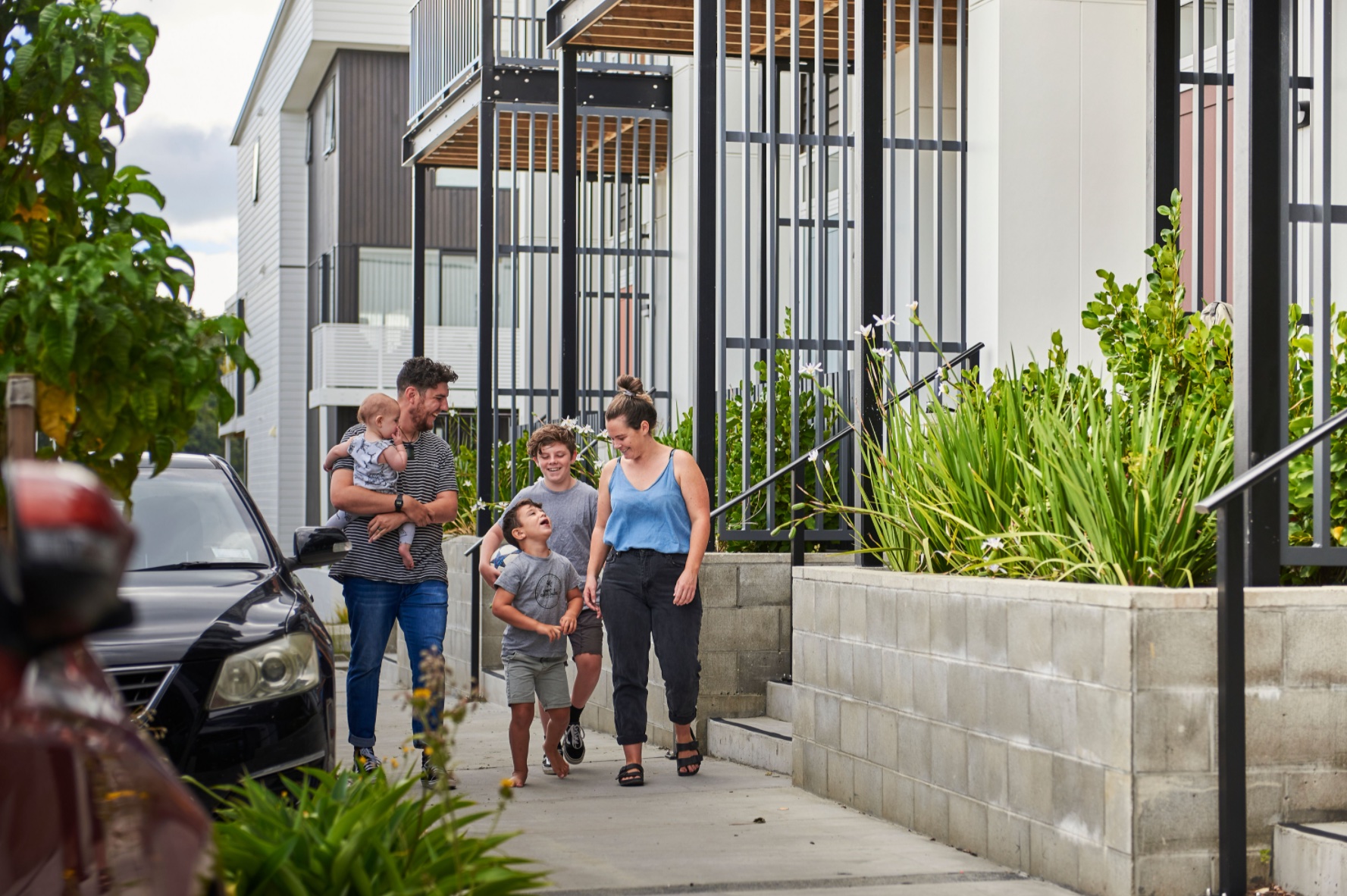 The Akehurst family. First appeared in Point Life in 2017.

Around the time Charlotte Collier-Holden and Tāwera Akehurst’s story first appeared in Point Life in 2017, they surprised their friends and family with an April Fool’s Day wedding. “Everyone thought they were attending a combined engagement party and first birthday for Otis,” Charlotte says.

They got married on the back lawn of the home they were renting in Waimauku and catered the party with pizza made in wood-fired pizza trucks.

April 2021 also marked one year since they moved into their first home, built by Classic Builders. The couple had originally won the ballot for a three-bedroom apartment in the Axis Series affordable homes programme, but the apartment building did not go ahead. A three-bedroom terrace home became theirs instead.

When Charlotte entered the ballot to buy an affordable home, she didn’t think she had a chance. “It was pretty crazy. We’re so grateful for the opportunity, it’s security for our family – our kids can grow up here. Our home is brand-new, insulated and warm. We have a heat pump, but we didn’t need to turn it on all winter.”

Charlotte says her mum’s first house was in Brown St, Ponsonby, and it had been occupied by squatters. “When mum moved into it, she said ‘what have we done?’ Mum laughs now and says she can’t believe our first home is brand-new.”

Charlotte says she loves the accessibility of Hobsonville Point. After a year’s maternity leave with Sonny, she’s returned to work in paediatrics at Waitakere Hospital. It takes her only 15 minutes to get to the hospital. Tāwera now works in the central city and enjoys catching the ferry to work. “So, he’s gone from sitting two hours each day in traffic to ferrying. He gets a walk in each day on the boardwalk to the ferry. It’s a much nicer way to start and finish each day,” Charlotte says.

The Akehurst family has enjoyed getting to know people in the community. “There are neighbours behind us with school-aged kids. There’s a mix of couples, families and older couples and retired people. And there are also several neighbours expecting babies. I love the mix of cultural and age diversity for the kids. It really appeals,” Charlotte says.

Hobsonville Point friends with young children love that kids can ride their bikes around. “The school in Waimaukau borders SH16, so there was no way we would let the kids ride to school. But we have no qualms about Niko walking or riding to school here. You see tiny kids walking to school because there’s a safe, community feel here.”