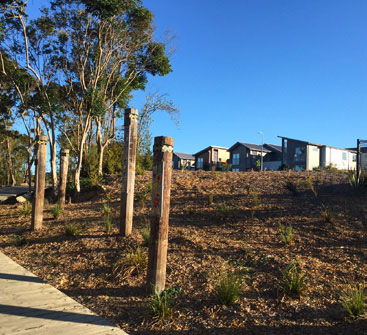 Memories of the former Hobsonville North Kindergarten are once again on public display, with a permanent home secured for a much-loved artwork.

The kindergarten formerly occupied a site on St Georges Road but, following negotiations with HLC, was relocated to its existing home in Whenuapai to make way for the Hobsonville Point development. Trish Burn, head teacher of the kindergarten at the time, requested that something be left behind as “a reminder to those who came here of our wonderful little paradise that taught so many children to value nature and become confident independent learners”.

And so, a collaborative creative project was born under the leadership and tutelage of artist Janet Holtrigter.

Alongside Janet, their teachers and parents, the then three and four year olds embraced imaginative thinking skills, problem solving and creative energy to complete an artwork with meaning for them. The resulting artwork - five posts featuring ceramics - was originally located on Hastings Street opposite Catalina Café but when this site was also developed, the piece was put into storage in 2013.

Now it is back on public, permanent display in its new home alongside the Hobsonville Point Coastal Walkway/Te Ara Manawa. This location will enable generations of visitors to enjoy the piece for years to come, including children who contributed to the project and are now aged nine and ten.