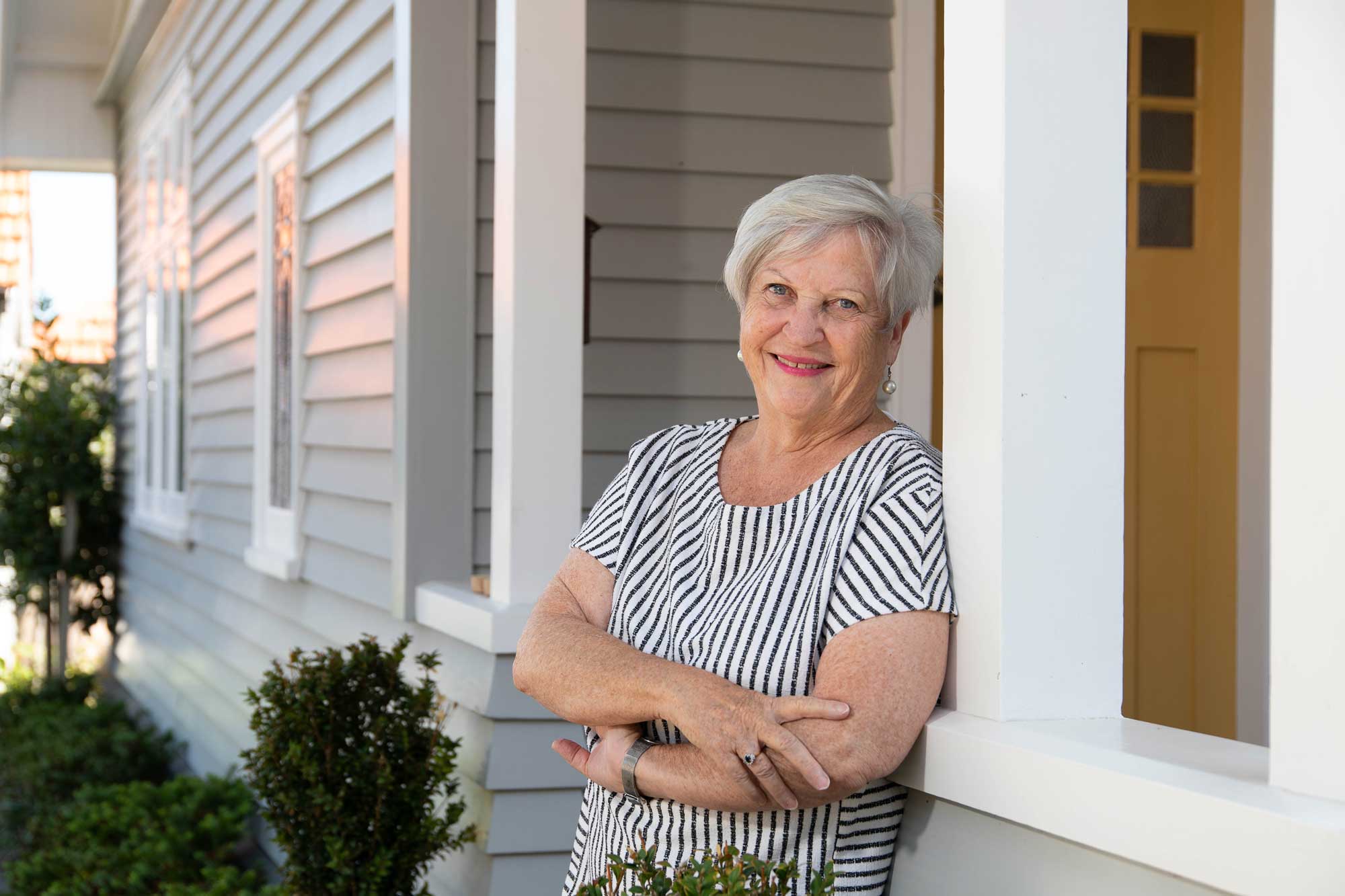 We’re sitting at Fabric Café on Hobsonville Point’s waterfront surrounded by pale timber and Italian marble, amid the clatter of flat whites being delivered, but Lindsey Dawson is a few miles and five decades away recalling life when she was newly married to her late husband, Peter Dawson.

“When Pete and I were first married we lived in an Air Force house on the base at Whenuapai. Pete was a pilot on Hercules transport aircraft – they were brand new then.”

Whenuapai, of course, is a couple of kilometres over the water from Hobsonville Point – close enough for Lindsey to hear the occasional dull roar of the now ‘vintage’ Hercs passing overhead.

Pete went on to have a decades-long career as a commercial pilot with Air New Zealand. Lindsey had trained as a reporter for the Auckland Star, and once their two daughters were at school, she resumed her career, working as a talk show host for a fledgling Radio Pacific in Manukau and at National Business Review. In 1981 she became the first staff writer employed by a brand new magazine celebrating our city, called Auckland Metro.

She had been at Metro for two years when she was offered the role of founding editor for a new magazine that would offer Kiwi women an alternative to the ubiquitous but conservative NZ Woman’s Weekly.

“The publishers of Metro decided they wanted to do their own women’s magazine so More was invented. I had been blown away by an English woman’s magazine called Nova which came out in the late ‘60s and was very cool – [it had] Jean Shrimpton and Twiggy as models and David Bailey’s terrific photography. It was full of really interesting stories and that was the sort of thing I wanted to do.”

And she did, editing More for seven years and growing it to a circulation figure that peaked at around 80,000 copies per month – ten times that of many well-known titles today. After More she “wanted to do something different” and so founded Next magazine which “blazed along too, and is still going strong today.”

Then came Grace and then in 2001 a move toward longer deadlines and a gentler pace with her switch to writing fiction. Lindsey is a published author of 10 titles, both fiction and non-fiction. The most recent is Scarlet and Magenta, a tale about Victorian life in a small Bay of Plenty town, which has an outspoken female character who is escaping a scandalous past at the centre of the story. This, from the book’s blurb on Amazon: “Scarlet and Magenta vividly reveals the trials and pleasures of colonial life and explores the question of what matters most in all of our lives – blood ties or friendship.”

During this period, with their daughters grown up, Lindsey and Pete were living in Hatfields Beach, “on a big, sloping, clay section. It got to be too much.” Lindsey had also tired of spending time in her car on the northern motorway and they decided to move closer to both the city and their daughters and grandchildren.

“In a weird sort of a way we’ve gone full circle. When we were looking for somewhere around here (Hobsonville Point) we heard that there were these old military houses that had been refurbed and had a look at one.”

“It was like coming home, in a way. Even the door handles felt familiar in my hand.”

She is describing one of the 1930s Defence Force houses that line Sunderland Avenue. Beautiful, solid timber homes designed in the English Domestic Revival style on generous sections, they were restored by developers Willis Bond & Co.

“They’ve been so well done it’s like living in a new house but they’ve got that nostalgia vibe.”

Writing Scarlet and Magenta sparked a fascination with Victorian life in Auckland and Lindsey is now researching her next book, a true story about a murder of a young settler in the Waitakeres. At the same time she has thrown herself into community life wholeheartedly by becoming a committee member for the Hobsonville Point Residents Society. Homebuyers join the society when they purchase at Hobsonville Point and pay an annual fee to belong. The organisation’s purpose is to protect residents’ enjoyment of their neighbourhood and owners’ investment in their home by maintaining the standards set out in Hobsonville Point’s masterplan.

All the committee members are volunteers but Lindsey has also recently taken on a paid community liaison position part-time. She admits to being surprised by how much she gets out of being on the Residents’ Society committee.

“I’ve always had a national perspective before. I was making magazines and other media aimed at all of New Zealand and I never had much interest in the local. I avoided being on committees like the plague, but the more I get into it the more interested I’ve become. You realise how the world works down at the most basic, grassroots level. It’s a long way from national and international government, but unless things are working at the local level, nothing works.”

“One of the things I really like about it is that it’s different from any other community I’ve lived in. It’s one of the only places in New Zealand that has been planned as a medium density community from the get-go, with all the systems set up to not only create a nice place in the first place but to maintain it in the future.”

Lindsey said she made a decision to “do something productive” at her new home as a way of meeting people. During her two decades at Hatfields Beach she knew her immediate neighbours but not the wider community.

“We were down a right-of-way as well so we didn’t see people walking past on the street and it was quite isolating.”

She prefers Hobsonville Point’s more compact, urban layout to typical suburban streets where “you live behind high fences or hedges. I’ve met some lovely people here. There’s a great spread of ages and I really like that.”

She says Hobsonville Point also attracts people from all over the world, as well as Kiwis who have lived abroad and are used to more compact cities. For Lindsey, this mix makes for a more vibrant and interesting community. Now, with Dee, her daughter, and three of her grandkids moving into Hobsonville Point as well, having gone ‘full circle’ feels like finding her way home.