Hobsonville Point: Right for us 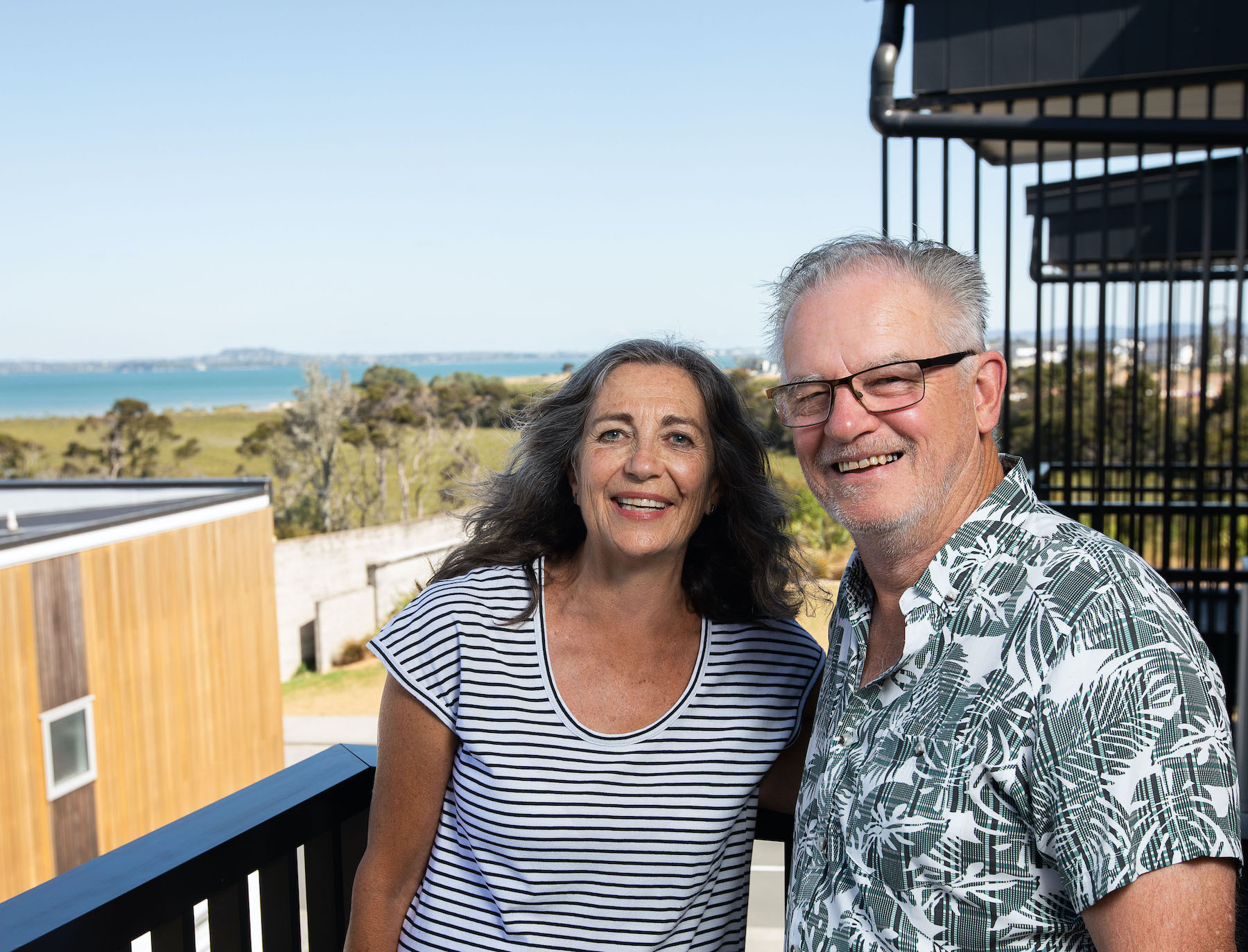 Sally Hughes and John Milligan chose Hobsonville Point because it is such “fantastic value for money”. One year on, they say living at the Point has delivered several unexpected bonuses.

Although they loved living in Kohimarama in their 1960s house surrounded by 40-year-old trees, “it had got to the stage where the garden was too big,” says Sally. “We wanted to reduce the maintenance of the property so we were free to go away for the weekend – and we also wanted to release a bit of capital so we could start up a retirement savings fund.”

Sally and John began looking at smaller properties, starting in Kohimarama and moving out in concentric circles through the suburbs. “We realised that our budget was only going to get us something really small. We were looking at 50-year-old brick and tile units with two bedrooms and one bathroom, no storage, maybe one carport if you were lucky – and you’d be walking into the unit’s living space from the front door.”

Friends took the pair on a tour of Hobsonville Point one weekend and they fell for the harbourside setting and urban design. Within weeks they had purchased a new terrace home near Te Onekiritea (Bomb Point). Sally describes their three-bedroom, three-bathroom home with a spacious living area and side-by-side double garage as “fantastically better value for money.”

They’ve swapped old for new but kept nearly the same amount of floor space, although their old place was single level and the new one is spread over three levels. “It’s actually more functional – having the kitchen as part of the living works better for us.”

The big garden has been replaced by two balconies, one with sea views. “I miss my trees, but I don’t miss the work that garden caused. John spent years raking leaves,” says Sally. The weekends are now free to amble down to the waterfront farmers market, see friends, or get out of the city.

Sally sees the extra exercise created by living on three levels as a positive. “We had to make the decision if we were buying for the rest of our lives or for the next stage of our lives. We decided we didn’t want to live in the sort of place that would be right for our 80s. We’ve got 15-20 years to consider that.”

One adjustment she has made to her lifestyle is getting up early to beat the traffic. She is currently Acting Manager of the Health Improvement Team at Auckland Regional Public Health Service. She starts her work day at 6.30am and finishes at 3pm. John is a locomotive engineer (train driver) and does shift work so can travel off-peak.

Sally and John moved so quickly to secure their home at Hobsonville Point that they were still discovering new things about the area months later. Sally couldn’t believe how much easier it was to get around the city from Hobsonville Point than from Kohimarama. “The motorway system is so excellent. Off-peak, it’s half an hour – motorway the whole way – to the airport.”

Sally and John were pleasantly surprised at the range of housing provided at different price points. “You go to other housing subdivisions and the houses are all the same – huge houses on not very big sections. I think the diversity of types of houses here in Hobsonville Point has also helped create a diverse community.”

The Northwest shopping centre was another surprise. As Eastern suburbs locals they weren’t aware it existed before they moved in. They’re also surprised at how much more they and their fellow residents walk locally.

Sally is chair of the Character Coalition and a member of the Auckland Council Heritage Advisory Panel. She says that despite her passion for heritage, she and John are really excited to be part of a new way of living for Auckland.

“This sort of intensive living really suits us. We look out our window and people are walking, cycling, scootering, skateboarding – there’s a liveliness to it,” she says. “The leafy suburbs of Auckland are dead quiet. People are always behind their high fences and hedges. In the 80s and 90s people got this big-fence mentality and I don’t like it.”

Sally is a fan of the variety that was included in the township at masterplanning stage. “I think those rules have been critical to how exciting it is to live here. Compared to other new suburbs the diversity of architectural styles is a big plus for John and I.”

“We also feel really good about our reduction in carbon footprint. We take up less space, we have sustainable heating, we don’t water a garden so we use less water, we have good insulation and good cross ventilation in summer.”

For Sally and John, the move has meant not so much a downsize as the opportunity to rightsize for their stage of life and to rationalise by ‘culling and sorting’ the contents of their old home.

“It has changed our lives. So much worry and responsibility have been taken away. At this time of our lives, heading towards retirement, it’s a huge weight lifted off not to have a big property to look after... and to have made this transition while we are still young enough to enjoy it and make the most of it.”