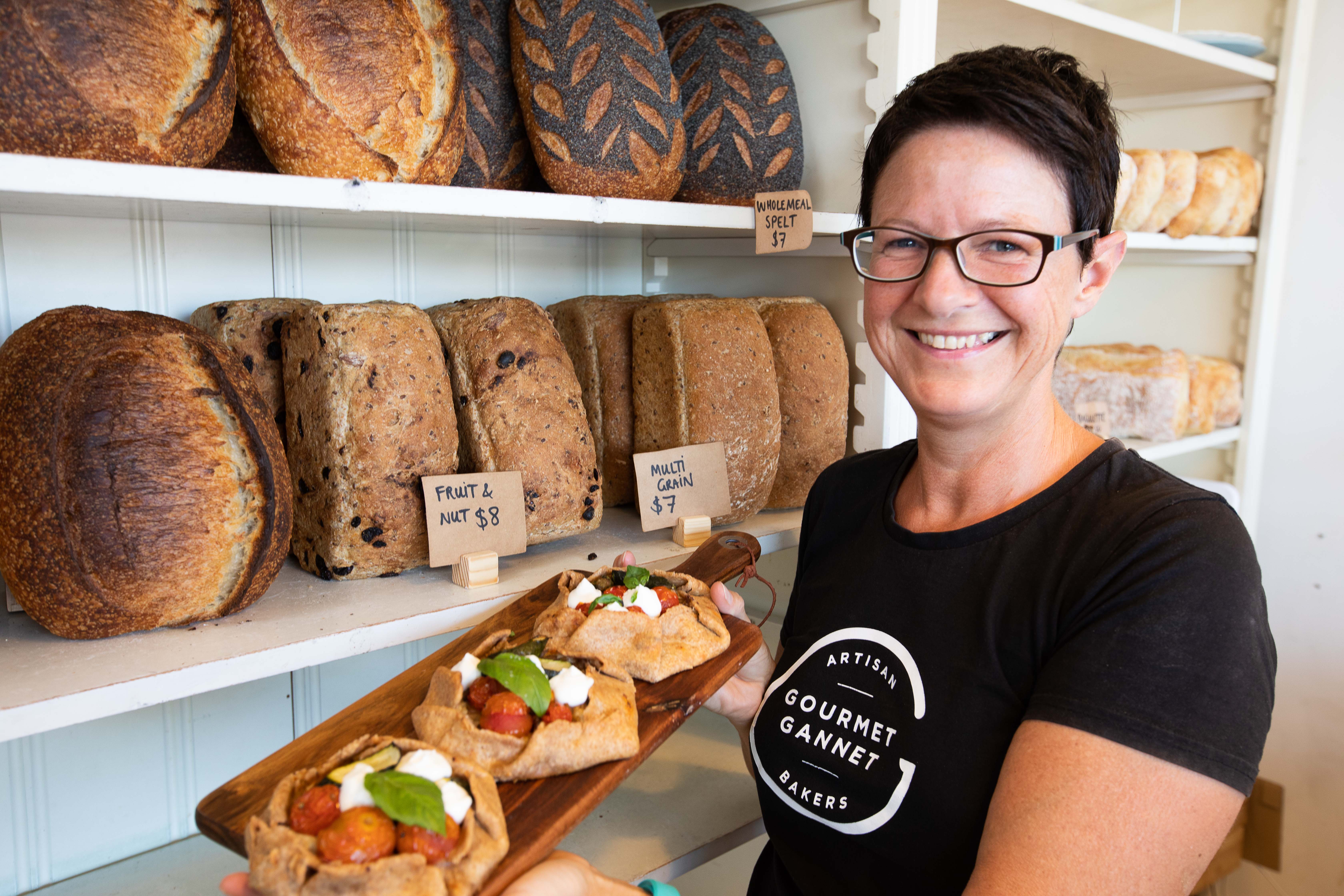 Gourmet Gannet has been selling handmade artisan baking at the Catalina Bay Farmers Market for two and a half years. Pastries, bread, cakes and slices are made from scratch every morning at their Huapai branch. They’re then loaded into a van and delivered to Hobsonville Point to be sold at the markets; all before 9 a.m.

“The team gets up at 3 a.m. to start baking,” says Allison Pirrie, owner and founder of the Gourmet Gannet. Allison lives in Muriwai (not far from the gannet colony which inspired the name), but she hails from Liverpool where she trained in classical patisserie. Her baking is informed by her European heritage, including eight years living and working in Frankfurt before moving to New Zealand.

“We stock French pastries and classical English baking with a modern twist, like Bakewell tarts and Eccles cakes, and our bread is made using traditional European methods and ingredients.”

Breads include ciabatta, french baguettes, five different flavours of sourdough, multigrain and fruit and nut loaf. Then there’s the sweet stuff: croissants are a morning favourite, and the brioche doughnuts have acquired something of a cult following.

Gourmet Gannet products are free of preservatives, mixers and additives. “We are conscious of what we put into our baking,” says Allison. “We like to use lowGI flours like buckwheat, rye and almond flour and unrefined sweeteners such as honey and maple syrup. That said, we are a traditional bakery, so olive oil and butter are still on the cards.”

Keeping with the community spirit of Hobsonville Point, Allison sources her ingredients from her fellow Farmers Market stallholders. “We get our fruit from Daryn and Louise of Salty River Farm which means our baking is informed by the seasons, and we like to buy honey from our friends at Earthbound.”

Gourmet Gannet will be moving into the Painting Bay, a small heritage building nestled beside the existing market, where Allison and her team will be able to bake on-site.

“When I started Gourmet Gannet I’d sell about 15 loaves on a good day. Today I have a team of eight, and we sell 90-120 loaves on a Saturday alone. We’ve outgrown our Huapai spot, so when I was approached to move into the old Painting Bay, I jumped at the chance.”

“The new building is beautiful with big, high ceilings. Big glazed windows have been installed at the front so that people will be able to look into the open kitchen and watch us bake. We’re hoping that over time we’ll be able to use it as our retail space too. In the meantime, we’ll continue to have a stall at the market to sell our baking.”

Allison says it has been exciting watching Hobsonville Point grow. “As someone who is from the UK which is very densely populated, Hobsonville Point has got it right. There are lots of green spaces and facilities, all in a beautiful location near the water. It’s going to go crazy. It’s the next happening place for Auckland, definitely.”