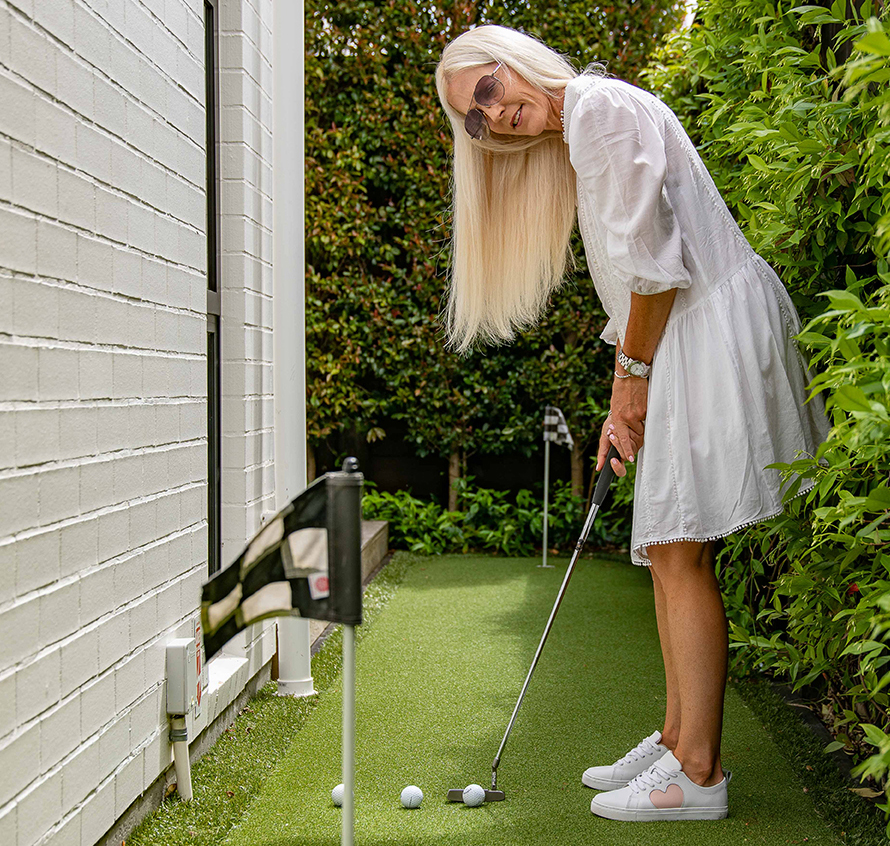 Sara and Anil (Jazz) Jasmat are both mad-keen golfers, with 4.4 and 6 handicaps, respectively. From their point of view, it made perfect sense to get their clubs out when it came to making the most of a narrow space alongside their end-terrace home on 236 square metres.

Sara got the idea of a putting green from visiting a friend’s home and used the same supplier, TigerTurf, to create one on their strip of land that would have otherwise been unused.

At approximately 9m x 1.2m, the green is compact but has everything it needs. “It has a rough around the edges, with holes and flags at each end. It has a gradient too, to make putting more challenging. Jazz is definitely a better putter than me, I’ll give him that,” Sara says.

Sara admits they don’t use the putting green daily like their friend does, but they did spend a lot of time on it during lockdown. Visiting children love to play on it, too.

The couple bought this home, their second at Hobsonville Point, off the plans and moved in three and a half years ago. Originally the garden was planned as a simple patio, but the couple built a new deck big enough for an L-shaped sofa, coffee table and a six-seater dining table. “We wanted to use all the space we could to its full potential, so nothing was wasted.”

Sara is a big fan of pink and her favourite hue is seen throughout the inside of the house. “The garden is Jazz’s domain. I knew I had to stay in my lane, so there’s not much pink outside,” Sara jokes. “One weekend he went to Melbourne on a boys’ trip. I tried sneaking some plants in, but they all died.”

“The garden is very green,” Jazz adds. He has included espaliered star jasmine, lilly pilly hedging and citrus, with lemon and lime trees.

A trellis divides the deck from the service area, which like most homes in the neighbourhood, contains a washing line and hot water cylinder.

The front of their home has hebes buxus edging the footpath, with griselinia hedging behind the front fence. The front yard also sports two large black pots with pink hydrangeas. “They’re not allowed to be planted in the ground,” jokes Sara.

To read more about what's happening at Hobsonville Point and to see other bite size backyards, check out the lastest Point Life issue here.