Christmas On The Point 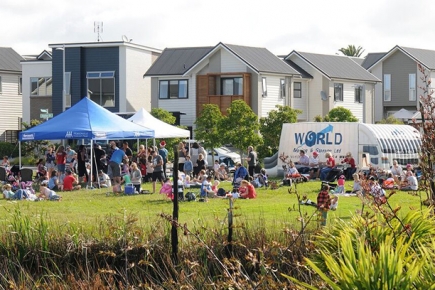 Ever since Matt and Jackie Still’s first Christmas at Hobsonville Point with their son Keegan four years ago, they have organised a Christmas get together in the nearby park for neighbours. With every year as more people move in, the number of people joining the neighbourly celebration also increases, as has the amount of community support.

This Christmas, contributions came from many parties – neighbours June and Andy Ranyard were happy to provide the power from their home for the bouncy castle, Jo Smo Hsu did the face painting, World Movers provided the BBQ and the bouncy castle, Harcourts provided a giant cake and James Barrow took photos. AVJennings put on a fantastic BBQ, with chocolates and mince pies provided by the Hobsonville Land Company. Matt said “it was fantastic to see so many new faces at this years BBQ, and it was a great opportunity to relax with neighbours that have become our friends”. Matt said the community support was great, even though he also had to take on the role of Santa at the last minute when nobody was brave enough to volunteer for this role!

Matt and Jackie are keen to see this continue as an annual community event. Jackie says “we expect the numbers attending to increase as more people move in, which will add to the great atmosphere of the get together, but it also means more planning and preparation will be needed, and we won’t be able to do it on our own, so we will be asking our community to help again”. Community events are often promoted on the Hobsonville Point Community Facebook page, and the Hobsonville Point Residents Society website.