Tell Us Your Stories 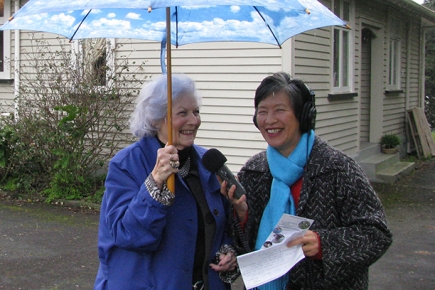 As most people who live at Hobsonville Point will know, the area has a rich history in terms of iwi, airforce and ecology. Hobsonville Land Company has commissioned Oral Historian, Sue Gee to interview people who have lived and worked at the former airbase. Two recent recordings have been particularly special, one of Janet Beech (nee Wilson) who is now in her eighties, was recorded as she walked around her former home, recalling her childhood memories of when she lived there in the late 1930’s. Her father Hugh Wilson was Commanding Officer at Hobsonville Base, and First Commanding Officer at Te Rapa, and served at Gallipoli and Passchendale. Sue also interviewed Annette Clark and her daughters who recounted their stories about their husband and father John ’Junk’ Clarke. This story can be found inside the restored old bus stop on the corner of Sunderland Ave and Buckley Ave.

Kathleen Waldock, Project Manager Events and Placemaking at HLC says, “Sue has such a gentle and friendly manner so it is easy to see how people find it easy to talk to her on topics that can be very emotional. It’s so important that we capture their stories, not only to acknowledge them, but for those who live here now and in the future to understand the history”.

Sue is also liaising with the West Auckland Research Centre (WARC), who has agreed to house the recordings and make them available to the public on request.

Sue is also researching stories about the former Rifle Range that is located near Bomb Point and will be transformed over the coming year to become an area with a stage and grassed terraces to watch performances. If you used to work at the Rifle Range and would like to share your stories, please email or phone Kathleen Waldock on 261 5280, email: kathleen.waldock@hlc.co.nz.